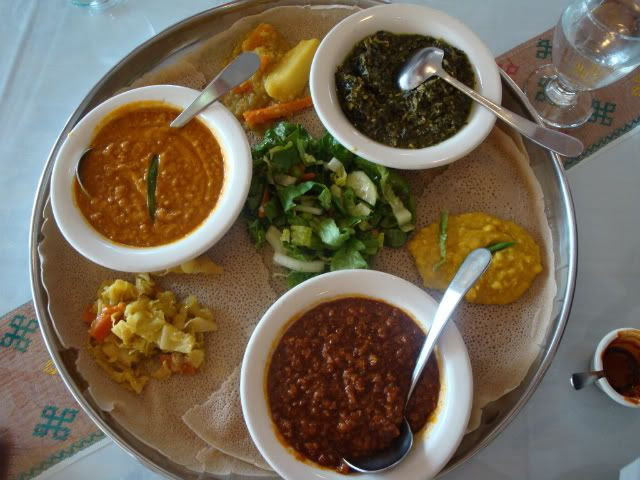 My first trip to Demera (4801 N Broadway Street) was pretty fantastic! It's an Ethiopian restaurant in Uptown, located conveniently a half block from the Lawrence redline stop. It sits amid some of Chicago's most famous historical landmarks--within half a block from the Aragon, the Riviera, the Green Mill, and the closed-down Uptown Theater. I give the food outstanding recommendations! 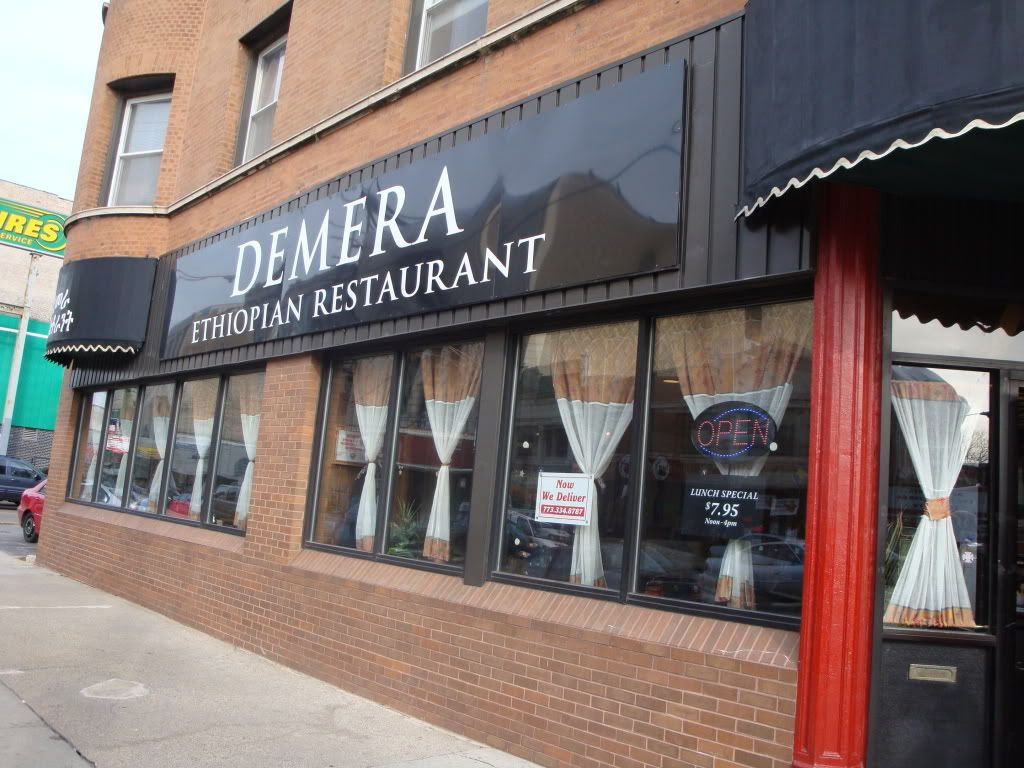 I met up with two friends this afternoon for a nice Saturday brunch to check out the restaurant. One of my friends had been there before, and she wanted us to try it out! The restaurant itself was very cute, decorated with ethnic art. There was even a set-up for live music! 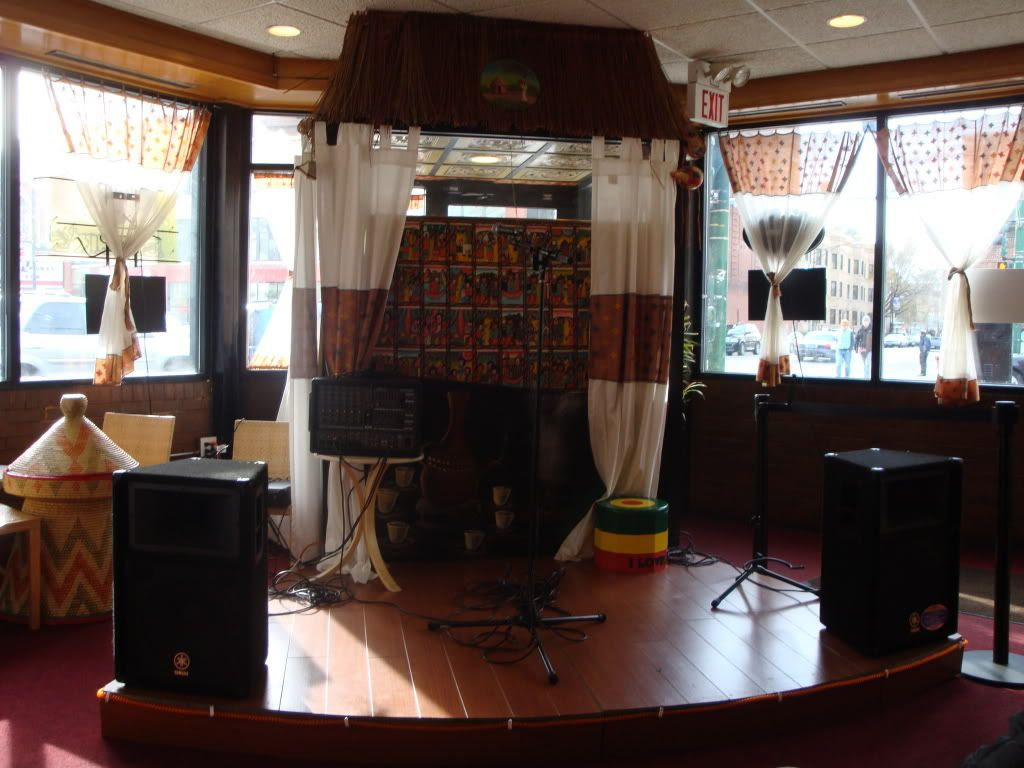 We started the meal by placing an order of the Buna, which is some STRONG Ethiopian coffee. We were pretty hungry, so we also ordered the two types of sambussas, a crusty dough with filling, as appetizers. The vegetarian sambussa was filled with lentils, veggies, and spices, while the spinach sambussa is self-explanatory ;-) The sambussas came with a red sauce served on the side. Both were very good, reminiscent of Indian samosas. The sauce was a nice compliment and had a sweet and spicy flavor. 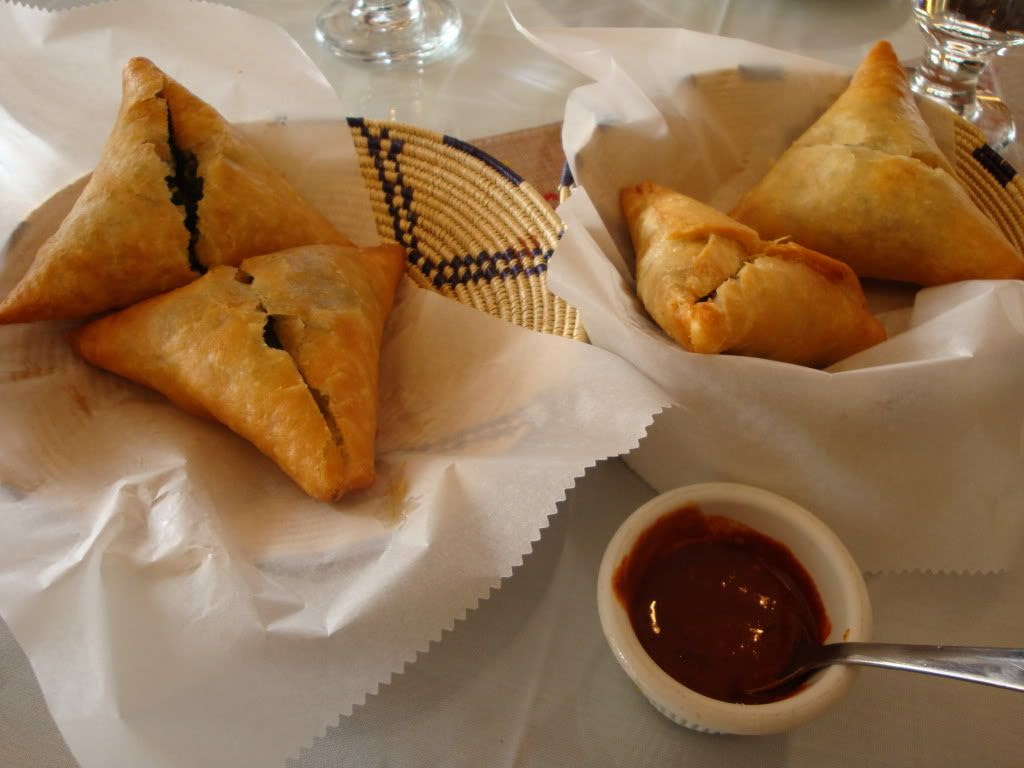 For the main course, we each picked a vegetarian entree to share, even though both my lunch partners were omni! We ordered the Ye-Misir Wot (a red lentil dish), the Shiro (blended and spiced legumes), and the Gomen (spiced collards). All three were very good! I'm definitely looking forward to coming back and having these dishes again!! 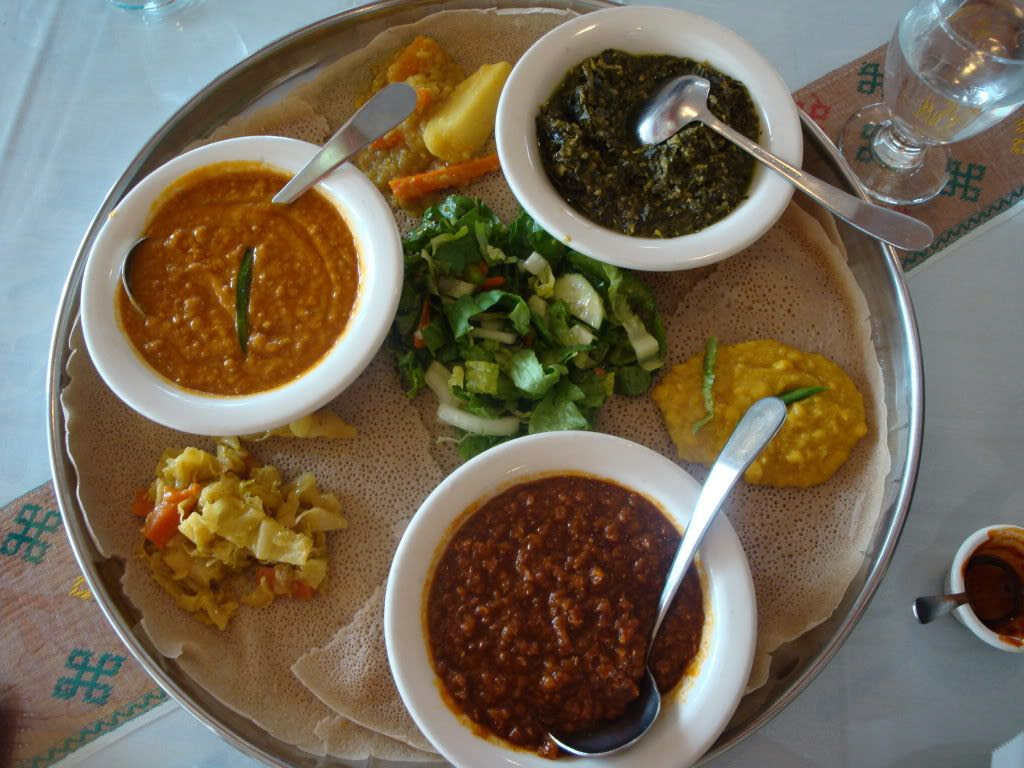 The food came out on the same platter, atop an injera tablecloth, with sides and a salad separating each dish. Injera is a spongey pancake-y bread made out of fermented teff flour, and it has a sourdough-y taste. It comes in large, flat pieces, and is generally used as the plate and silverware for the meal. I love injera, but it's very filling. Generally, all of the injera should be eaten with the meal, but we had too much food between the three of us! Next time, we may just order a combination platter (Demera Messob) instead of an individual dish for each person. 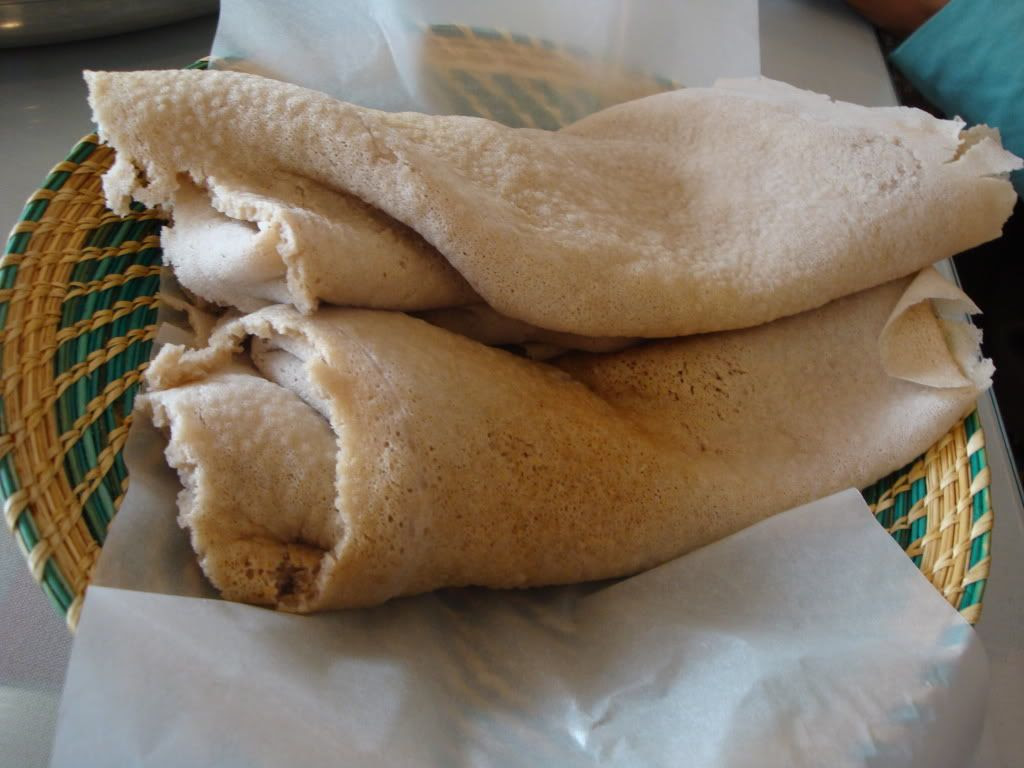 The Buna (coffee) did not actually come out until the end of the meal. I'm unclear whether it just takes that long to make it, or if that's the traditional time to serve the coffee. It came out in a Jebena (clay coffee pot) and was served in tiny handle-less coffee cups, similar to Chinese tea cups. The coffee was very dark, strong, and thick. I liked mine black, but the friend who I was sharing the pot with preferred sugar in hers. 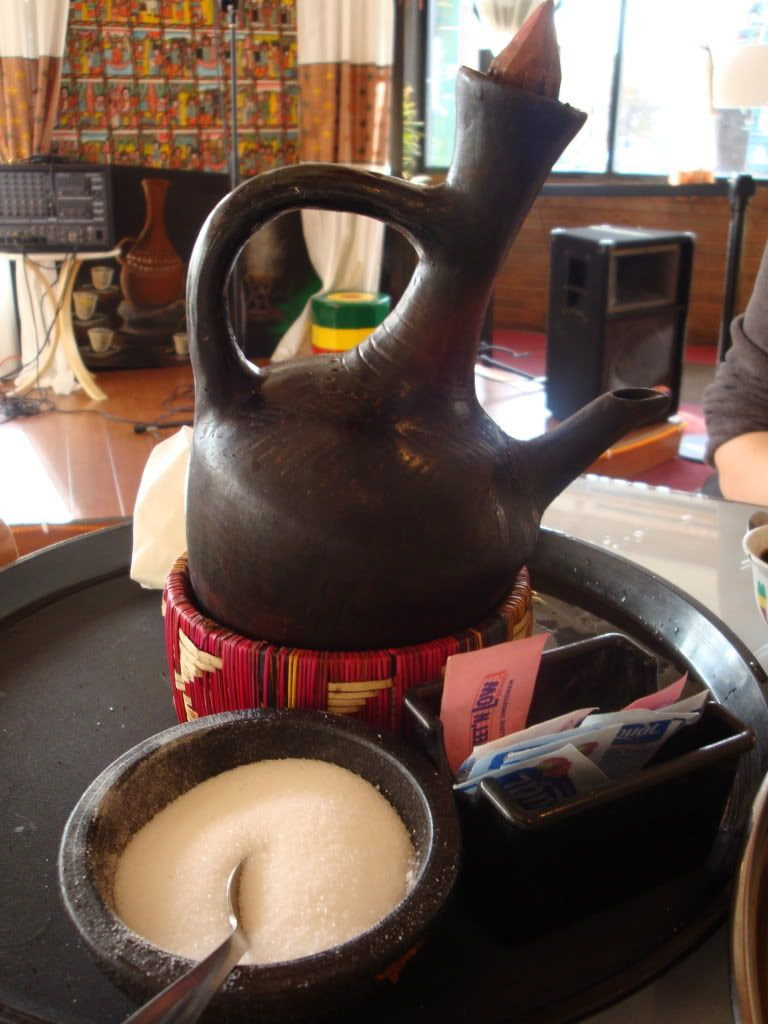 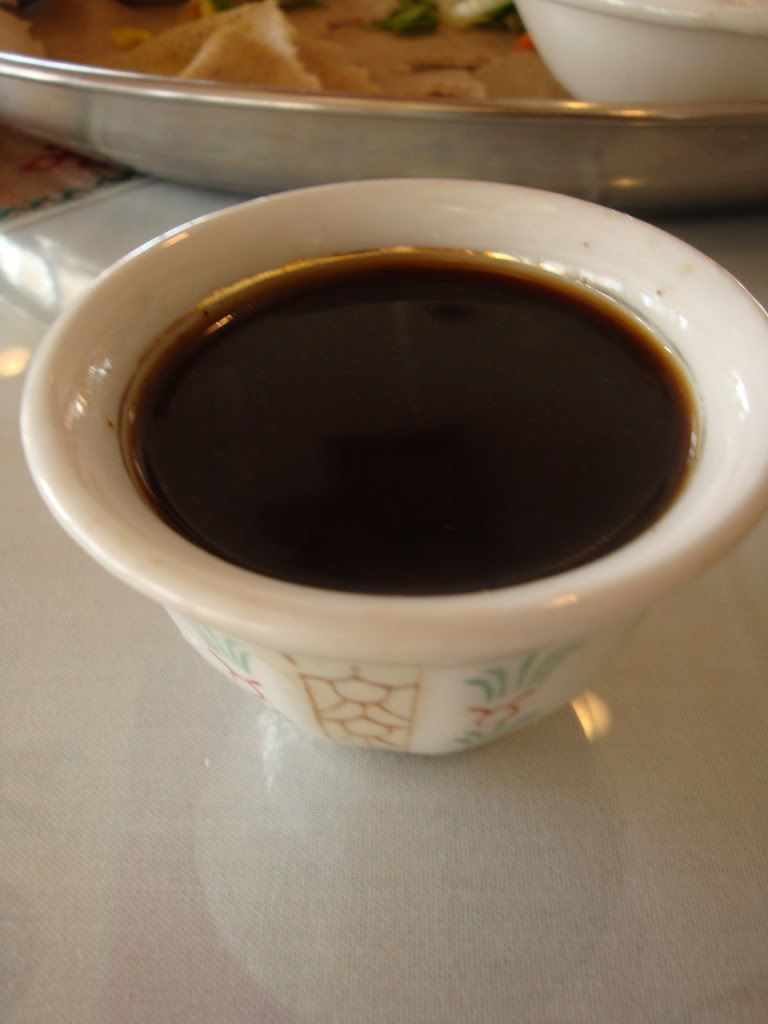 I really enjoyed my experience at Demera. It was a cute little restaurant in a pretty cool neighborhood. The food was fantastic, and I'll look forward to coming back to try the other things on the menu. . . Or at least re-visit all my new favorites. There was not a thing I tried that I didn't like!

Email ThisBlogThis!Share to TwitterShare to FacebookShare to Pinterest
Labels: Restaurants

I've been to an Ethiopian restaurant in my hometown, and both times, the coffee came out right when we ordered it, so not sure what is typical?

Also, there are no utensils in the restaurant where I go! The fillings are placed right on the injera. That gets to be really messy at the end when you're eating the injera that's been soaking with the lentils/whatever for an hour!

This place looks fantastic, though!

I'm thinking she probably forgot about it, or she didn't understand (there was definitely a bit of a language barrier).

I was actually surprised they served the dishes in bowls with spoons! I've been to a few other Ethiopian restaurants, and they've all served it just how you described--directly on the injera. I actually like the drippy messy injera at the end. It absorbs all the flavor :)