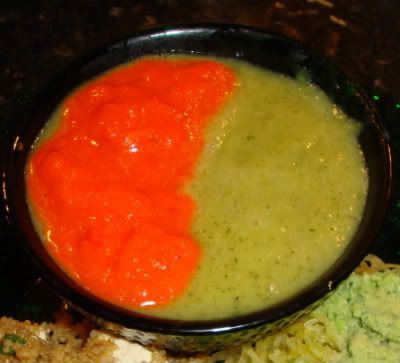 Alright, folks! This is the first in a series of four posts to catalog the recipes my friend and I submitted for our group blog for Challenge #9: Cooking Light (part 2). We did the challenge in two parts--part one was my entry, and part two is his entry (which we only did because the deadline was extended). So yeah, I'm blogging about his entry :-P

Anyways, this first entry is our take on Zucchini and Fennel Soup with Roasted Red Pepper Puree. We chose this recipe because our friend challenged us to use fennel in our menu (which I officially dub as Lake's Fennel Challenge). Unfortunately, the recipe wasn't very good. The red pepper puree was very plain and did not have much flavor. The green soup was fairly decent, but looked rather ugly. I would have preferred a few more spices to add depth to the flavor, but unfortunately my palate isn't refined enough to figure out what it needed. I also tried blending the two halves together, hoping it would salvage the soup, but that made it taste even worse. If I were to repeat the recipe, I'd only do the green part, but do some heavy research as to which spices might help compliment the flavor.

Below is the recipe. We didn't do any modifications besides substituting vegetable broth for chicken broth (we were cooking for 3 vegetarians--ourselves included--and a vegan.) 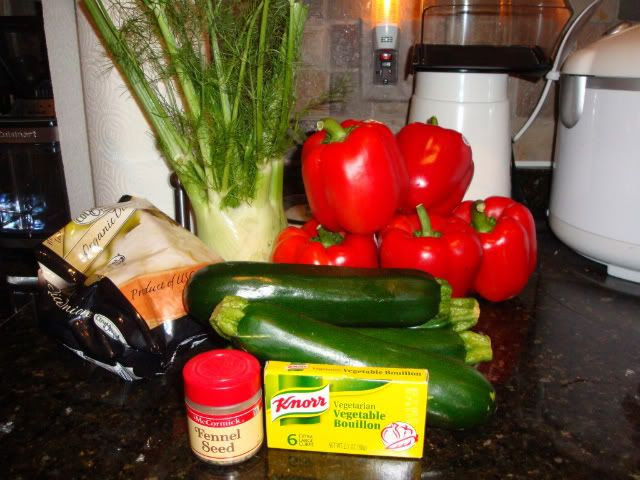 Cut bell peppers in half lengthwise; discard seeds and membranes. Place pepper halves, skin sides up, on a foil-lined baking sheet; flatten with hand. Broil 20 minutes or until blackened. 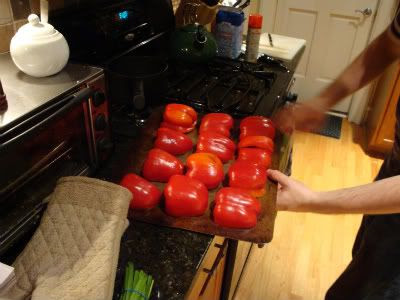 Place in a zip-top plastic bag; seal. Let stand 20 minutes. Peel and cut into strips. Place peppers in beaker of an immersion blender [we used a regular blender]; add oil. Puree until smooth. Transfer puree to a bowl. Stir in 1/8 teaspoon salt and 1/8 teaspoon black pepper. 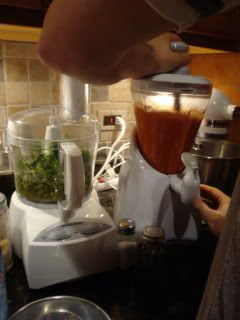 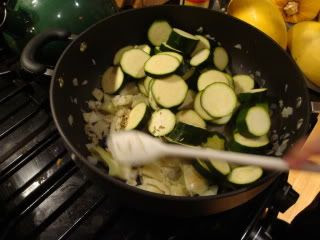 Place vegetable mixture, 1/4 teaspoon salt, and 1/4 teaspoon black pepper in beaker of an immersion a regular blender; puree until smooth. Pour 1 cup soup into each of 6 bowls; top each serving with 1/3 cup pepper puree. 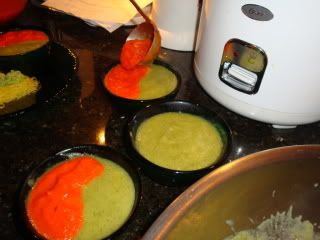