I might as well put up the entry I submitted for the first cooking challenge I participated in for the group cooking blog I'm in. This one took place mid-September, right before my trip to New York.

The challenge was dubbed the "Odds & Ends Challenge." Rather than having a theme ingredient, the goal of the challenge was to use up ingredients you already had in your fridge, pantry, or freezer. Click the link below to continue reading what I had posted:

--------------------
September 8, 2008
This challenge was perfect for me, since I'm leaving town in a few days and needed to use up all the fresh veggies left in my fridge! As I was looking through my pantry to figure out what else I could use up, I found a box of kasha I bought a long time ago that I never got around to trying. . . so I'm also using this to fulfill Des's "try something new" challenge. 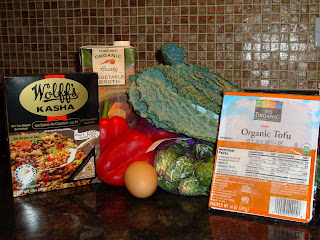 I'd never had kasha before, so I had no clue what it tasted like or how to cook it. I had some brussels sprouts, kale, tofu, and red peppers in the fridge that really needed to be eaten, so I figured I could just throw everything together and hope for the best :)

I ended up just steaming the brussels sprouts, turning the kale, peppers, and tofu into a stir fry, and using the kasha as a side dish. It turned out pretty well!

I started off by quartering and steaming the brussels sprouts:

Then I followed the package directions to make the kasha. I boiled two cups of veggie broth (which was also just something sitting in my pantry that needed to be used). While that was going, I beat an egg and coated 1 cup of kasha with it.

Then I cooked the kasha/egg mixture in a dry skillet until it was no longer sticky and the grains separated. By then, the broth was boiling, so I could pour it onto the kasha, cover the skillet, and let it simmer until the liquid was absorbed.

While the kasha was cooking, I chopped up the tofu, and tossed it with some tamari, Bragg's, and liquid smoke:

I sauteed the tofu in a skillet, and steamed the kale. Once the tofu was brown, I took it off the heat, and used the same skillet to stir fry the red peppers. I transferred the steamed kale to the skillet, and added a little tamari and Bragg's to flavor the kale & peppers. Then I added the tofu back to the stir fried veggies.

Once I was done with the kale/pepper/tofu stir fry, the kasha was done, so all I had to do it plate it! Voilà!