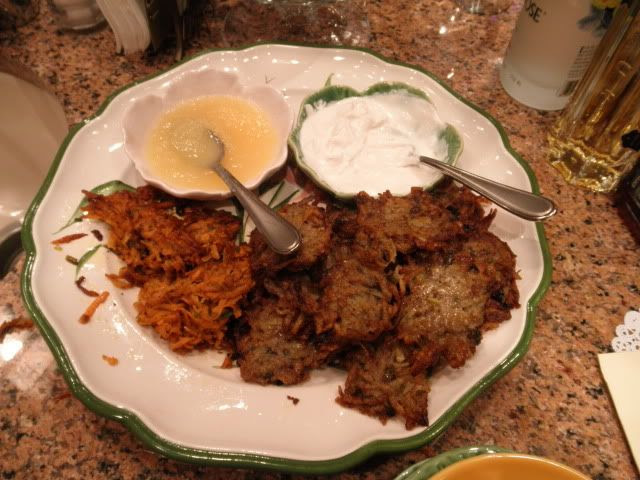 We tried our hand at veganizing latkes at this year's Holiday Dinner. Latkes are generally enjoyed during Hanukkah and are traditionally made with grated potatoes, flour, and egg. We used a modified version of the recipe found in the book Vegan Table. We decided to make two version of the recipe: one using white potatoes, and another using sweet potatoes. The sweet potato version were not as structurally sound as the regular version, but still tasted pretty good! All in all, I think they were a success and may find their way back onto the menu for the Holiday Dinner once again.

The biggest change we made to the recipe was really how the flax seeds were handled. The first step of the original recipe tells you to blend 2 Tablespoons of ground flax seeds with 1/4 cup water. Now, I have no clue what kind of food processor or blender the author of this book owns, but I'll tell you that neither the food processor nor the blender we have can handle such a small volume. So, unless you own the world's tiniest blender, that instruction just won't work.

We found two work-arounds for this. First, if you can grind your flax seeds finely enough, you can simply whisk the ground flax seeds into the water, then allow the mixture to sit for about 5 minutes until it thickens. This works best if you buy pre-ground flax, or if you grind the heck out of your seeds. The other alternative is to triple the recipe, then use only 1/3 of the resulting paste, discarding the rest as waste. As this is somewhat wasteful, I'd prefer the first option, but it's a good alternative if you're making a double or triple batch anyways.


Whisk ground flaxseed and water together for 1-2 minutes, until mixture reaches a thick and creamy, almost gelatinous consistency. Set aside. (If mixture does not thicken, flax was not ground finely enough; either start over or triple the recipe and blend in food processor or blender. Only use 1/3 of resulting mixture).

Spread potatoes on a kitchen towel or cheesecloth, and roll up jelly-roll style. Twist towel tightly to wring out as much liquid as possible. You may need to do this again with a second towel to extract all the water. Transfer to a mixing bowl.

Add "flax egg" to potatoes, along with scallions, flour, and salt. Use your hands to combine ingredients and to get a feel for the mixture. You want it moist but not too wet.

Heat some oil in a large-size nonstick saute pan over medium heat until hot but not smoking. Using a tablespoon, scoop a large spoonful of potato mixture into hot oil, pressing down to for 1/4 to 1/2-inch (6mm to 1cm) thick patty. You are not trying to creat dense patties, but the batter should stick together enough to be flipped without falling apart. Slide a spatula underneath latkes while they're cooking to make sure they don't stick to the pan.

Brown on one side, turn over, and brown on the other. You may need more oil as you add more latkes to the pan. Transfer to a plate lined with paper towels to soak up excess oil. Season with salt.

Serve hot with nondairy sour cream and/or applesauce and sprinkle with chives, if desired.

Tip: Shredded or grated potatoes will oxidize and turn a grayish brownish color pretty quickly. It is recommended that you chop you scallions and prepare you flax egg before shredding the potatoes. Prepare the potatoes by hand, or use the special grating blade in your food processor.