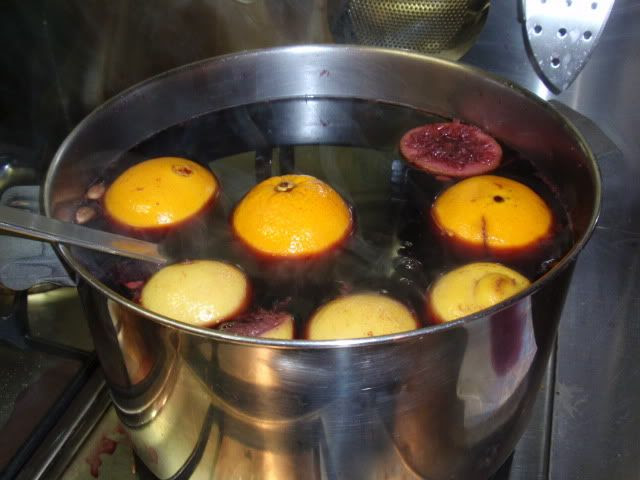 This Glühwein recipe was featured as our aperitif at this year's Holiday Dinner. Glühwein is a warm mulled wine that is often enjoyed in German-speaking countries. There are many variations depending on the region, but is generally prepared with red wine that has been heated and spiced with cinnamon, cloves, citrus, and sugar. It is similar in essence to its Nordic cousin, Glögg, which is of Scandinavian origin. Drinking glühwein always puts me in the holiday mood! One of my favorite things to do during the Christmas season is to visit the big German Christmas Market at Daley Plaza and enjoy some hot glühwein to warm up :)

The recipe we used was nice and simple. Adding whole fruits to the pot definitely gave it a nice festive flair, but when we first tested the recipe, we used extracts instead, just to get an idea of the taste without putting too much effort in making it. Both versions worked well, though, the pot is much prettier with the fruit floating inside :-P

Cut the oranges and lemons in half, squeeze out the juice into a large enamel casserole dish or pot, and stud the squeezed halves with cloves. Pour the red wine into the pot with the sugar, and mix the wine, juice and sugar together to dissolve the sugar in the liquid. Float the spiced fruits in the pot and add the cardamom pods and the cinnamon sticks, breaking them in half. Put the pot over a medium heat and bring to a high heat, without boiling, stirring occasionally to ensure that the sugar has dissolved properly. Then add the sherry, stir and just before serving add the brandy. Don't keep the pot at a high constant heat - just let it stay warm.