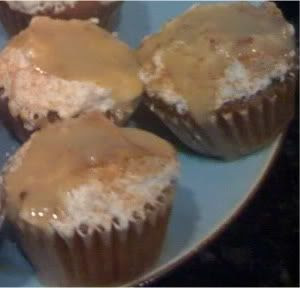 So, the favorite for Cupcake Battle Round 2, and (arguably) the overall Cupcake Challenge were the Apple Cider Cupcakes. Despite that, we were also able to improve the flavor further by adding a little bit of green apple extract to the frosting. DELICIOUS! They definitely remind me of fall, caramel apples, and apple cider. Mmmmm!

Directions
1. Preheat the oven to 350 degrees (325 for mini-cupcakes). Line a muffin tray with cupcake liners.
2. Place apple cider, agar agar, cinnamon sticks, cloves, and allspice in a small saucepan. If using agar flakes, let mixture soak for 10 minutes; if using powder, proceed to the next step.
3. Sift together flour, baking powder, baking soda, and salt.
4. In a separate bowl, mix together the apple butter, maple syrup, sugar, vegetable oil, apple cider vinegar, and vanilla.
5. Bring the apple cider mixture to a boil, then lower heat to bring to a low rolling boil, careful not to let it boil over. Boil for about 15 minutes until the cider is reduced to 1 ¼ cups and the agar agar is dissolved. (If the cider hasn’t reduced enough, boil longer. If it has reduced too much, add extra apple cider to make up for the difference.) Stir frequently because the agar agar tends to stick to the sides of the pan.
6. Strain the apple cider and discard the spices. Let cool to lukewarm, then add the apple cider to the apple butter mixture and mix well. Add the flour mixture to the we3t ingredients in roughly three batches, mixing well after each addition.
7. Spray the cupcake liners with nonstick cooking spray. Fill each liner three-quarters full. Bake for 22 to 25 minutes, until a toothpick inserted into the center of a cupcake comes out clean.
8. Transfer to a cooling rack and let cool completely before frosting.

To assemble:
1. Pipe the buttercream frosting onto the cupcakes and sprinkle some cinnamon or cinnamon sugar on top of it. Use a spoon to drizzle the caramel over the frosting. It would be cute to stick a cinnamon stick onto the frosting if you are feeling fancy-pants.

Note: The spices called for are in their whole form. If you can’t find whole spices, add ¼ tsp each ground cinnamon and ground allspice and ⅛ tsp ground cloves to the flour mixture.