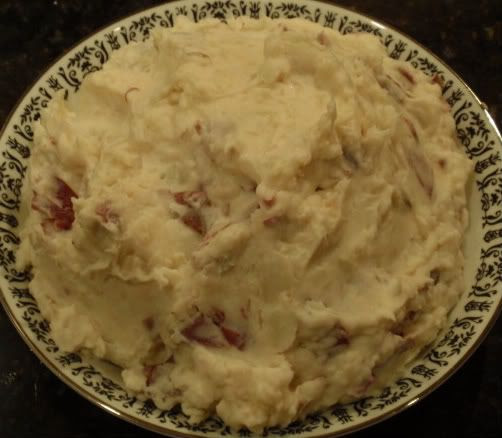 This recipe is based upon a side dish served at a brewery in Chicago. A group of us have gone a number of times, and always thought that the mashed potatoes were amazing. So one day I decided to try my hand at re-creating them. The results were wonderful--a very decadent and rich side dish that goes well with nearly anything! At the holiday party this year they were a runaway favorite--especially among the non-vegetarians present. This recipe is made vegan quite simply--just use Toffutti (or other vegan sub) cream cheese and sour cream, and earth balance (or other vegan sub) butter! Note that this recipe is really a "make it up as you go along" sort of event. The ratios are generally 1 tub cream cheese (8oz) per 2 pounds of potatoes, but everything can be easily adjusted to taste as you go. This recipe also scales up very easily.

Boil the potatoes until fork tender, about 10 minutes. While the potatoes are boiling, lightly saute the garlic in oil to release the flavor--do not brown. Remove from heat and add butter, cream cheese and sour cream to the pan. Mix the ingredients well until warmed--you may need to add the occasional heat to accomplish this. Transfer the contents of the pan to a mixing bowl/stand mixer bowl.

Drain the potatoes and add to the bowl. Add salt and pepper. Mash (or mix using paddle) the potatoes with the other ingredients until well combined. The potatoes should be fluffy and somewhat creamy. Do not over mix--there should still be a little texture. Add seasonings and "dairy" ingredients to taste.