Being in a brand new city that neither of us had been to, crashing at the hotel when we got there just wouldn’t do. We had picked up some food on the road, so we weren’t particularly hungry. (Our on-the-road meal was clearly not memorable, since I have no photographic evidence of it. It might have been Cracker Barrel or some other place you only go to if you’re on a road trip!) But we wanted to experience Memphis at least a little, despite the fact that it looked totally dead when we arrived.

On a suggestion from my friend’s childhood buddy, who had joined us for our mid-afternoon brunch in Indy, we had checked into Gen X Inn in Memphis; it was a cute hotel with a contemporary vibe, and more importantly, it seemed pretty safe to be coming in at 1am. Once we were checked in, we headed to Lamplighter (at the suggestion of same friend), which was just a short drive from the hotel. 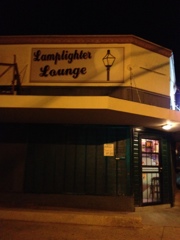 Yikes! Ok, total dive bar. Now, I don’t really mind dive bars, but there was really nothing to eat or drink there that we wanted. The beers were all crap (the fanciest one was probably PBR. Blargh!) We asked what spirits they had, and their booze list was equally crappy. Also, for a place with such poor food and drink selections, it was super bright. So not only were you eating and drinking crap, you could see the crap you were eating and drinking. After a long drive and another late night, that just wasn’t going to work for us.

Luckily, there was another bar nearby called Zinnie’s. Just for the outside, it looked a bit better. The bar itself was nicer and the lights were dimmer-- more appropriate for the late hour. After our experience of the day, we decided to order Manhattans. The bartender said that they actually don’t have all the ingredients to make a Manhattan, but he could try to mimic it with what they had. We figured if he was willing to be adventurous, so would we! 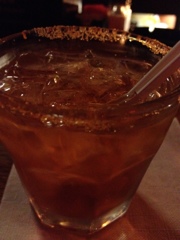 The faux-manhattans turned out pretty well! He actually didn’t have most of the ingredients: sweet vermouth, bitters, and cherries. . . I think the solution involved grenadine and an orange sugar lined rim. And something else. So clearly it wasn’t a manhattan, but what he did make definitely gave a manhattan-esque vibe. Props to him for trying despite lacking ¾ of the ingredients!! I’m pretty sure we both had about 3 of them- each! And since that part of Memphis was pretty clearly NOT hopping, there was only one other person at the bar with us, so we got to chatting with our awesome bartender. He gave some great suggestions as to what to do while we were in town.

Though since we were on a time limit, it was mostly suggestions for places to go before noon the next day. We definitely followed his suggestion to go to a local brewery the next day for brunch, which was a pretty awesome move. More on that next time!!!