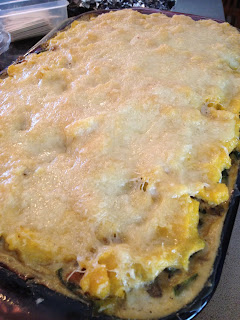 The next entry in my Great Recipe Challenge of 2012 is another recipe I had considered trying for my potluck the other week (see original version of the recipe here). Even though I didn't end up picking it, I think it actually ended up tasting much better than the recipe I went with! I brought it to my family Easter party this weekend, and received several compliments on the dish! This is definitely a winner, and I have to put a star on this recipe as one that will make it on my rotating list of regular meals.

The reason I had originally NOT picked this recipe for the potluck I went to was because I was a bit suspicious of it. The original version had you throw a bunch of raw veggies in a casserole and warned the reader that:
1. it was very important to have a deep casserole dish (aka, spillover warning!), and
2. it would come out very watery and so you have to serve it with a slotted spatula.

Um, yeah... Not the kind of dish I wanted to try out for a bunch of foodies! I knew the recipe would need tweaking to resolve these problems, so I figured I would try it out for Easter. Since it was for a large family gathering, if it were a flop, there would be plenty of other food for people to eat.

I ended up pre-cooking the vegetables to get the water out before it went into the casserole. Most of the water came from the eggplant, zucchini, and mushrooms. My end product ended up only being slightly watery, so that's an improvement from the original recipe! The one downside was that since my casserole pan was so full (and it was a 9 x 13 x 2-in pan, so pretty standard size, and large), some of the egg mixture spilled over while it was cooking and covered the bottom of the oven. It ended up being ok, though I was quite unhappy at the big mess and burning smell it made! I can't even imagine what kind of mess it would have made if I had just thrown in the raw veggies in there, since the volume would have been about twice as big!

So for my write-up, I'll suggest that rather going with a regular eggplant, use the smaller Japanese variety. Also, I'll reduce the number of zucchinis from four to three. That should reduce the volume in the casserole dish enough to solve the spillage problem, and since the zucchinis and eggplant were the biggest water culprits, these changes should also reduce that issue. I've included a note in my version of the recipe to place a cookie tray below the dish in case it spills in addition to the pre-cooking step, so that the next time I try it, I'm not re-inventing the wheel!

Once I try this version of it, I'll confirm or re-adjust the recipe to make sure that the wateriness and overflow/spillage are no longer a problem! But despite all its problems, it makes for a delicious casserole!


Directions:
In a small saucepan, combine cornmeal and stock over medium-high heat. Once it begins to boil, reduce the heat to low, cover and cook for 25 minutes, stirring occasionally. It may be necessary to add up to an additional cup of water while cooking, depending on the coarseness of the cornmeal. Set aside.

While the polenta is cooking, preheat the oven to 400°. Grease a large, deep baking dish.

In a large sauce pan or wok, heat olive oil over medium-high heat. Add sausages to brown, approximately 3 minutes; once cooked through, set aside. Add shallots, leeks, fennel and 1/2 cup water in same pan. Saute until cooked through, 5-10 minutes. Set aside with the sausage. Cook eggplant, zucchinis, and mushrooms in the same pan, 5-10 minutes. These veggies will release a lot of water, so remove from pan with a slotted spoon, or drain in a colander lined with paper towels. Place all the veggies and sausage in the baking dish.

Bake for 30-40 minutes, or until the top layer has formed a crust and the cheese has deeply browned. *NOTE: In case of spillage, place a foil-lined cookie tray on the rack beneath the casserole, just in case.*