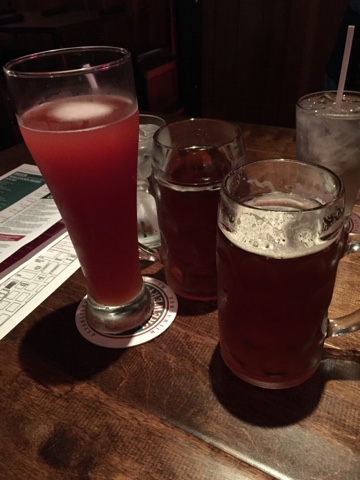 The second stop of our 2015 Brew-venture was Water Street Brewery in Milwaukee!  This might not be a very fair review of the bar, since we arrived around 11:15pm, but for completeness sake, I wanted to share our experience.

My friend got the Raspberry Weiss, which was surprisingly mild-flavored considering the color.  I thought for sure it'd be distinctly fruity.  But it lacked overall flavor.  My other friend and I ordered the Punch You in the Eye PA.  Yes, I'm pretty sure it was all because of the name.  Though I actually wasn't all that impressed with the selection, so that was the one that sounded the best to me.  The other beers on draft were a lager light, a bavarian weiss, a raspberry weiss, that IPA, an amber, and an Oktoberfest.  So, mostly things that don't taste like anything.

In any case, I think the IPA was overall pretty mediocre.  I honestly couldn't even remember what I'd had until I took a look at a picture I took of the beer list.  Thank goodness for smart phones!

Anyways, the weird part of the evening was when the waitress said she was getting off her shift so she closed out our tab.  She said we could continue to order from the bar.  Great!  This always happens at other places, so we didn't think it was a big deal. The beers were huge so it would take us a while to drink anyways so no big deal.  Until 15 minutes later we realized we were the only ones in the bar besides the bartender.

Um.  Was the bar closed?  Was it just so uncool that no one was there besides the poor saps from out of town?  I think we were so weirded out about been the only ones there, we chugged our beers and go the heck out of there.  The area seemed dead anyways, so maybe we chose wrong when we booked our hotel!

Anyways, I'd say the beer was ok, but if you want to check this place out, perhaps it's best to go during the daytime!