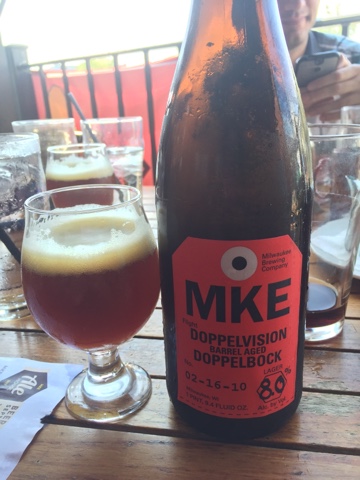 Our 3rd stop on our 2015 Wisconsin Brew-venture was Milwaukee Ale House!

After our weird visit at Water Street Brewing the night before, we slept in on Saturday and walked over to Milwaukee Ale House around noon for some brunch.  Unfortunately, it looks like they only serve brunch on Sundays, since they only had a lunch menu!  Boo, negative one for them right off the bat!

For dessert we shared this bottle of Barrel Aged Doppelvision.  Truth be told, doppelbock's aren't really my thing, but I still enjoyed this one.  Probably because I like bourbon, ha!  I think it makes all beers taste better ;-)

I thought this was a cute spot overlooking the river.  It was also quite entertaining since there was an event going on, and boats kept passing by full of people wearing various costumes.  It was like a parade in the water!

As we were leaving, we noticed there was a sign saying they offered 4 tasters for $7 or something like that.  If we had known, we would have ordered 2-3 of those so we could try more of the beers on the menu!  Something to keep in mind for next time!  I much prefer having smaller portions of more beers than a huge glass of one thing.