Sprecher: Worth the Tour! 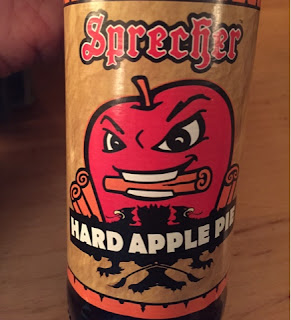 After lunch at Milwaukee Ale House, we checked out of our hotel then headed up to Sprecher.  We had actually tried buying tickets to their 3:15 tour but it was already sold out!  Since it was only a 15 minute drive from our hotel, we figured we'd still stop by, check out their tap room, and buy some beer.

WELL!  When we got there, we were informed the taproom was only for people who went on the tour.  You couldn't just go there and buy beer.  Booo!  But, the guy at the register told us to check ask the tour guide if there was still space on the tour (even though we knew it was sold out online).

Lucky for us he told us that!  The tour guide sold us 3 tour tickets on the spot and closed the door behind us.  I'm not sure if people didn't show up for the tour, or if we were just lucky he was lenient.  In any case, an extra 3 people didn't make it overly crowded, so we were in!  First thing he did was pour us all beers.  Ha.

The tour was pretty cool and our guide was funny, entertaining, and informative.  What more could you ask for?  Of course the highlight of the tour was the end when we got to go to the taproom and get tasters of everything.  They also had some light snacks for sale (which we took advantage of and bought cheese curds of course!  #becausewisconsin).

The unfortunate part of going on the 3:15 tour is that it's around 4 when you're done with the tour, and the tap room closes at 5.  Which means we didn't get to use all our beer tickets by the time it was last call.  Which was ok with us since we still had 2 more breweries to visit that day!  I would definitely go back and either drink faster or catch an earlier tour!

In any case, my favorite of the day was their hard apple pie, which I surprisingly enjoyed more than their Rye IPA and their stout!  What?!  Perhaps I'd been drinking a lot of beer that weekend already and found the Apple Pie light and refreshing?  In any case, I ended up going home with a few bottles of that, in addition to my favorite (the Abbey Trippel) and some stouts.