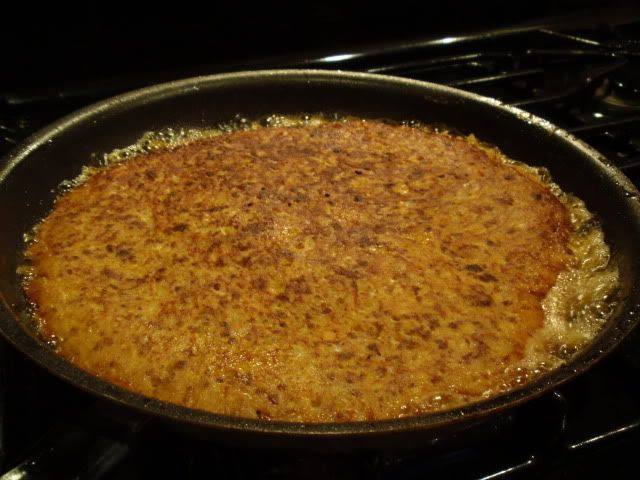 This dish turned out ridiculously AMAZING! A Spanish tortilla is actually an potato-filled omelet rather than the small flatbreads we normally think of. Just about every tapas place I've been to has its own version of Tortilla Espanola (also sometimes called Torta Espanola). Most are filled with potato and onions, and served with a garlic aioli. We went a step further and added some vegetarian chorizo, a very flavorful sausage that is usually made of pork. Honestly, I feel like our version didn't lose anything by subbing the soy version for the meat. It was THAT delicious!

This is actually one of the few challenge recipes we've done that we didn't try to veganize. We figured we'd see if the vegetarian version worked, then if there was still interest, we'd veganize it in the future. Since this DID end up going well, we will definitely be trying one or more vegan versions that (hopefully) won't end up just being scrambled tofu!

For the recipe itself, we adapted a recipe from the kitchen of one of my favorite chefs - Emeril! Here's the link to the original recipe. We made two major changes. The first, obviously, was to substitute soy chorizo for the meaty variety. I'm a huge fan of Melissa's Soyrizo, but I also know Trader Joe's also has its brand, as well as a few others. The important thing, I think, is to make sure to get the kind that resembles ground sausage, rather than varieties that are more solid and resemble sausage links. Here is what we used: 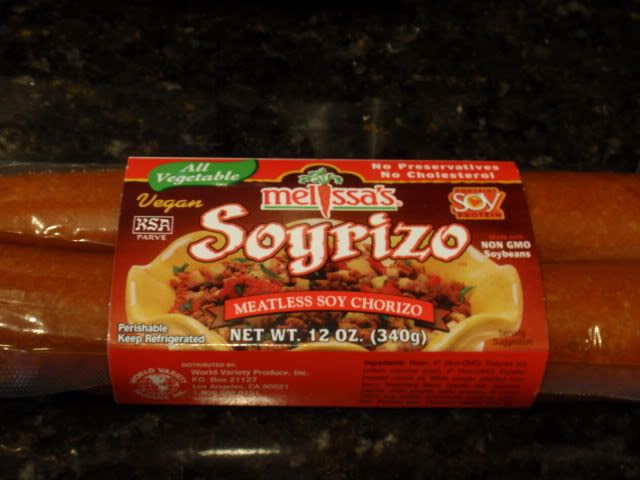 Our second change was done more to save time and energy than anything else. We decided that instead of peeling and slicing our potatoes thinly, we would just use reconstituted freeze-dried hash brown potatoes. These were unseasoned and uncooked, so we just used them as if they were raw potatoes that we had shredded ourselves. It worked like a charm! Obviously, if we ever made these for a party or for guests, we would go through the trouble of using real potatoes; but in a pinch, this worked great! To give you an idea, here's a picture of what we used: 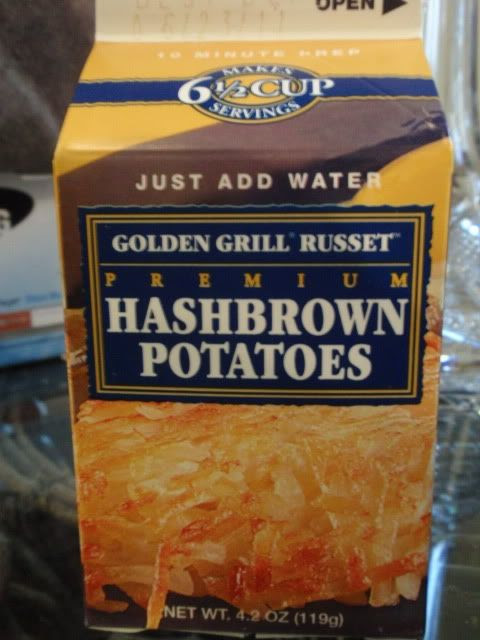 The greatest thing I love about this recipe is how it would be so easy to incorporate into my routine. It's actually pretty healthy for you, especially if you substitute eggbeaters for the eggs, and maybe use a combination of Melissa's Soyrizo and Upton's Naturals Chorizo-Style Seitan, which has more protein and less fat than Soyrizo. Also, using the hash browns makes this dish very quick and easy to make! I could see myself making an omelet every Sunday evening, and then having an awesome breakfast all week!

Anyways, now that I've gone on and on about how I love this recipe, here it finally is:

Directions:
1. Heat 1 tablespoon oil in a large skillet over medium heat and add potatoes alternately with the onions, a little at a time & stirring as needed, until all the potatoes and onions are in the skillet. Cook, stirring occasionally, until the potatoes are tender but not brown. Remove from heat and set aside.

2. In the same skillet, add the vegan chorizo with 1 tablespoon olive oil. Cook over medium-high heat, breaking up the sausage pieces periodically, until browned, about 4 minutes. Remove from heat.

3. In a large bowl beat the eggs until slightly foamy. Add the salt, garlic and red pepper flakes. Stir to combine. Add the potato-onion mixture and the chorizo to the eggs; stir gently to combine. Let sit for 15 minutes.

4. Heat 2 tablespoons olive oil over high heat in a clean 9 or 10-inch nonstick skillet and, when very hot (smoking), add the egg-potato mixture. Using the back of a spoon or a spatula, spread the potatoes evenly in the skillet, pressing down to condense. Reduce the temperature to medium-high and cook, shaking the pan often to prevent sticking.

5. When the omelet begins to brown underneath, invert a plate of the same or slightly larger diameter over the skillet and, working quickly and very carefully, invert the skillet to release the omelet onto the plate. Add the remaining tablespoon of oil to the skillet, then slide the omelet back into the pan and cook until beginning to brown on the second side. Continue cooking the omelet, flipping occasionally, until golden brown on both sides and cooked through. Transfer the omelet to a platter and set aside to cool.

6. Slice and serve either warm or at room temperature with garlic aioli. 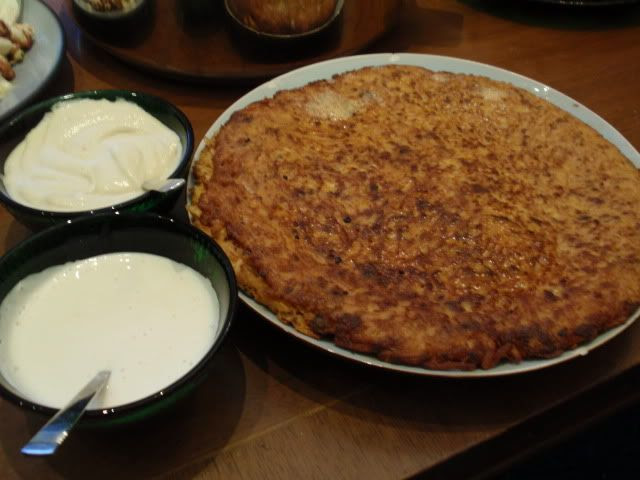 Has anyone tried the Spanish omelette of Trader Joe's sold it in March and April 2011 in the Trader Joe's on the west coast.

I actually haven't been to TJ's in a long while! I'll look for it next time I go!