An Emeril-Inspired Vegan with a Vengeance Tortilla Espanola 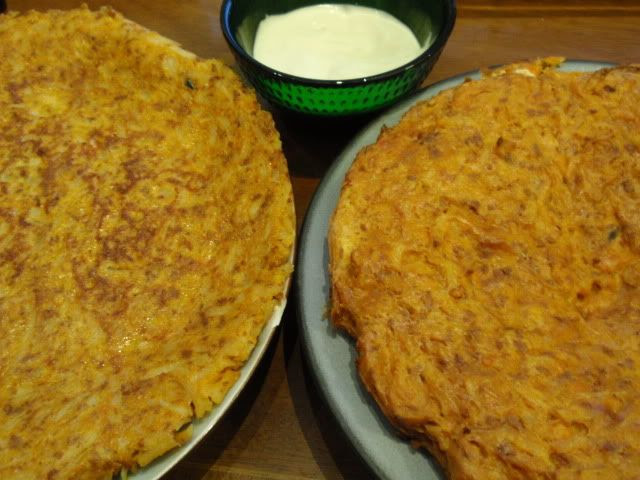 Last week, we made an Emeril-Inspired Tortilla Espanola that was seriously to die for! It was definitely the best dish from last week’s challenge. However, it was our first challenge recipe that we’d ever used that we didn’t try to veganize or give vegan alternatives for. Also, my friend Lake, who always used to help, guide, and challenge David & myself in our food adventures before he moved away to NYC, is a vegan. Since he was the cause and inspiration for many of our challenges, it seemed like a shame that we wouldn’t be able to share ALL our successful new creations with him the next time he comes to visit.

In fact, after seeing our pictures from last week, he challenged me to make him a vegan cheese omelet the next time he visits from New York. Not to be defeated by a challenge, I accepted and started brainstorming ideas on how to make it work. I was convinced that I could not only make a veganize a cheese omelet, but I could also veganize the tortilla recipe I used last time... And it turned out I was right!

I’ve made many incarnations of scrambled tofu before, as a substitute for scrambled eggs. I figured that might be the starting point for turning an egg omelet into a tofu omelet. I had a feeling that if you treat soft tofu like eggs and mix it with soy milk, and seasonings, then add a little flavor and yellow color in the form of nutritional yeast, mustard, or turmeric, this might give me the dish I was looking for. I also feared that pan-frying might break up the tofu mixture, so I thought it might be better to bake it like a fritatta rather than an omelet.

Serendipitously, however, Dave & I happened to find an exact recipe for a vegan tortilla espanola in the cookbook Vegan with a Vengeance. It was almost exactly what I was thinking of doing, except she used saffron as the color/flavor agent rather than nutritional yeast, and it was for a tortilla espanola rather than a plain cheese omelet. Great! To make it more similar to the one we made last week, we added soyrizo to the recipe and substituted re-hydrated hash brown potatoes for the potatoes in the recipe.

It turned out so well that it was actually difficult to tell the difference between the two omelets at first glance. It was a little more obviously during the taste test, but only because we were scrutinizing everything we tasted. The tofu omelet crumbled a little easier and was softer than the egg. It also had a few areas that were more bland than others. However, when we ate the leftovers the next day, we noticed the flavors were more evenly distributed. Perhaps aging the omelet a day helped meld the flavors. It could also be that the egg omelet required us to allow the egg to sit with the soyrizo, salt, pepper, garlic, potatoes, and onions for about 20 minutes before cooking. If the tofu mixture were allowed to do the same, the flavors might have been able to infuse throughout the omelet a little better. 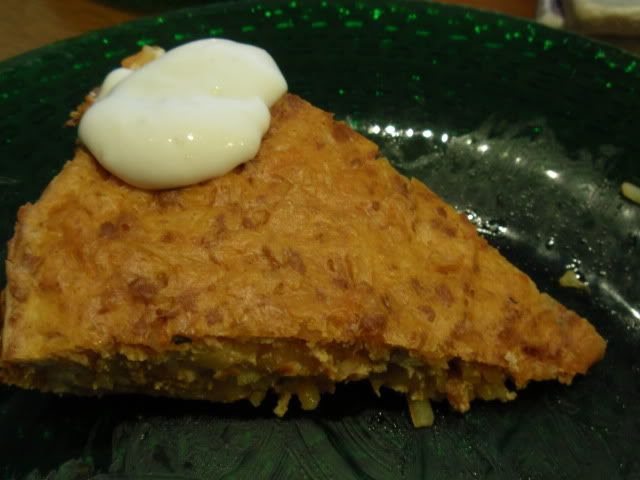 Place the saffron threads in a small cup and gently press the threads with the back of a spoon a few times; don't crush completely. Warm the soy milk in a small saucepan till just about boiling. Remove from heat and pour over the saffron; stir briefly and set aside for a minimum of 25 minutes. The longer the saffron soaks in the soy milk, the more flavor and color will be released.

Preheat oven to 375F. Pour 1/4 cup olive oil into a 10-inch cast-iron skillet. Add the potatoes and onions. The pan should not be completely full; there should be about 1/4 inch of space left on top; remove some potatoes if it appears too full. Gently toss the onions and potatoes in oil to coat. If using fresh potatoes, place in the oven and roast for 30-35 minutes, stirring on occasion, till onions are very soft and the potatoes are tender. If using rehydrated hashbrown potatoes, saute onions and potatoes on stove top until tender.

Meanwhile, in a food processor blend till smooth the drained tofu, garlic, and remaining 1 tablespoon olive oil. Add the soy milk mixture to the tofu mixture along with salt and cayenne pepper. Blend till creamy.

When the potatoes and onions are tender, remove from heat. In a separate pan, saute chorizo until heated through, add to potatoes and onions. Pour the tofu mixture into the pan and gently fold the potatoes, onions, and chorizo into the tofu mixture. With a rubber spatula, smooth the top, making sure to make the center slightly more shallow than the outside; this will help ensure the center cooks evenly.

Bake for 50 mixture to 1 hour till the top is deep yellow and lightly browned in spots, and a knife inserted into the center comes out clean. Remove from oven and allow to cool at least 20 minutes before cutting.

To cut, run a knife along the edges, and press down on the omelet while slicing. Excellent both warm and at room temperature. Serve with Garlic Aioli.