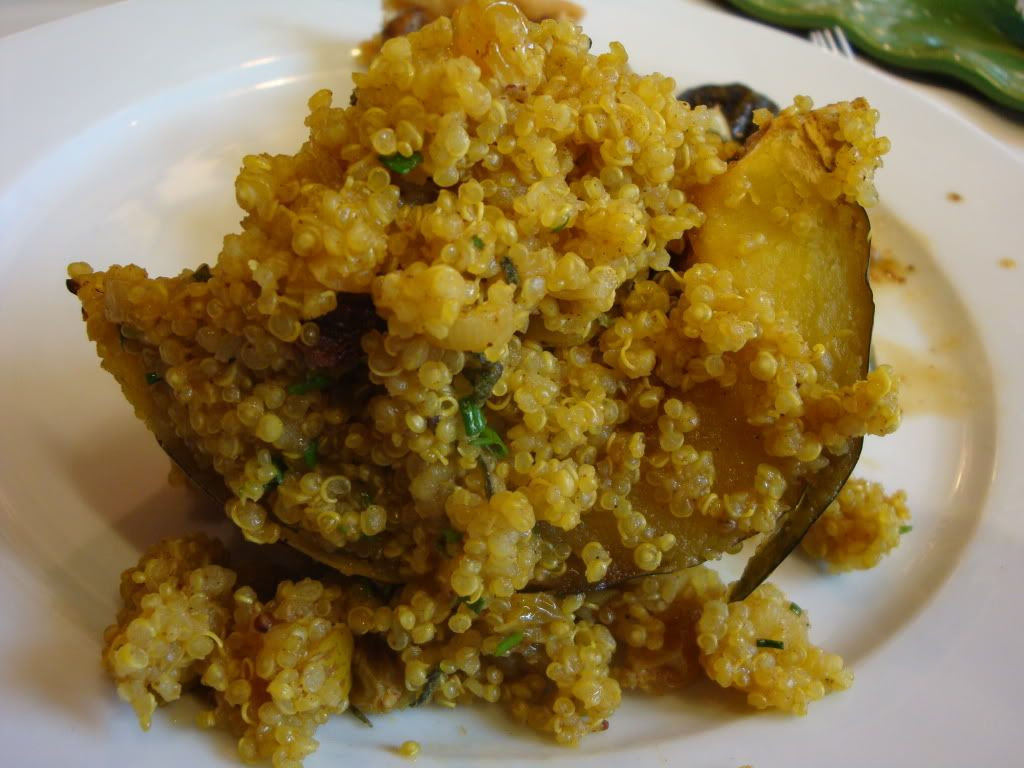 This is amazingly delicious! I learned this recipe at the Vegetarian Thanksgiving Class I took at the Chopping Block last Sunday. I enjoyed the recipe so much, I made a modified version of it for my family Thanksgiving party.

This recipe is delicious as is. However, it's just a little butter heavy. In the future, I'd probably skip or ease back on the butter, or use a vegan substitution. I'd may also skip the sugar for the squash. I think squash is good enough by itself without extra sweeteners! For my Thanksgiving party, I just used cut-up butternut and acorn squash (readily available at Trader Joe's!) and mixed it in with the stuffing. I thought that'd be a more pot-luck friendly way to serve it, rather than having stuffed individual squash halves.

I've re-typed my modified version of the recipe they gave us in class. I've added changes and improvements based on my notes in class and what I've done so far. I've also included my own further improvements that I'd like to try out in italics, and well as additional information from the notes that I took during the class.

--------------------
Apple, Sage, and Quinoa Stuffing
For the acorn squash:
4 acorn squash [or 2 lbs cut-up squash]
1 stick butter, room temperature [skip or use sub like Earth Balance]
3 tbsp brown sugar [This could also be skipped. Maybe use cinnamon instead?]
salt & pepper to taste

Preheat oven to 375.
Cut the squashes lengthwise and remove the seeds so you have a hollowed out squash. [Obviously you skip this step if you have pre-cut squash pieces] Mix together the butter, brown sugar, salt, and pepper in a small bowl. Generously smear the insides of the squash with the butter mixture, and bake on a parchment lined sheet tray until fork tender, about 40 minutes. Set aside. 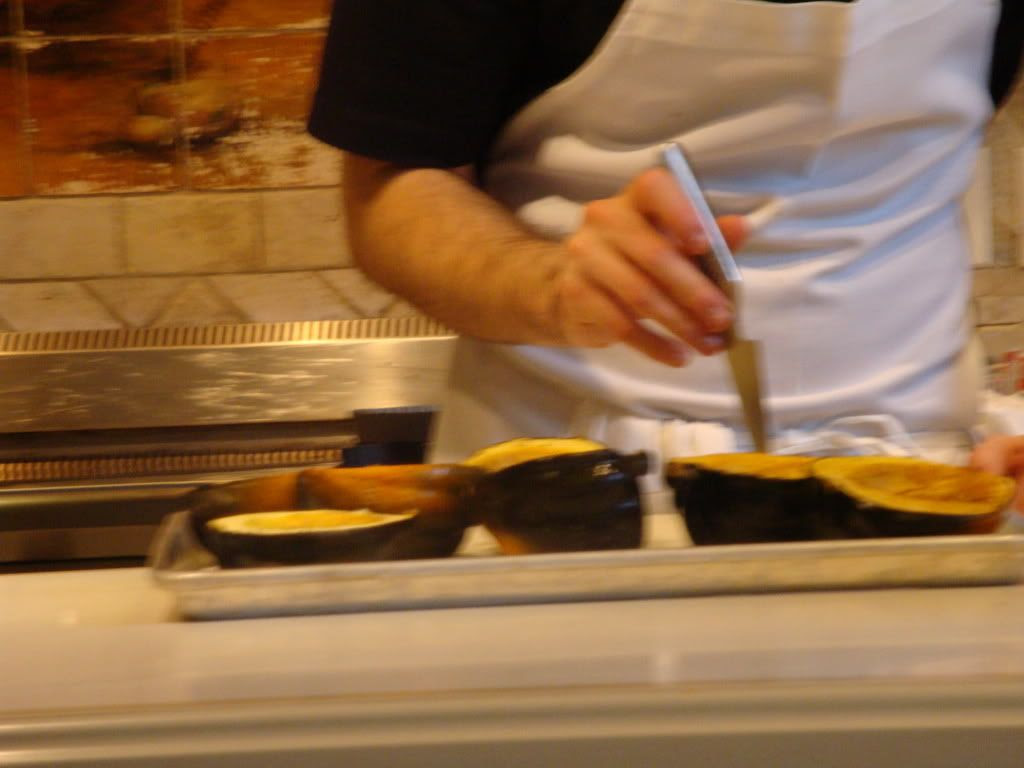 Heat a heavy pot over medium heat and add the butter. Gently saute the shallots until softened, about 1 minute. Add the apples, curry powder, cinnamon, and cayenne and quinoa. Cook an additional minute to toast the spices. 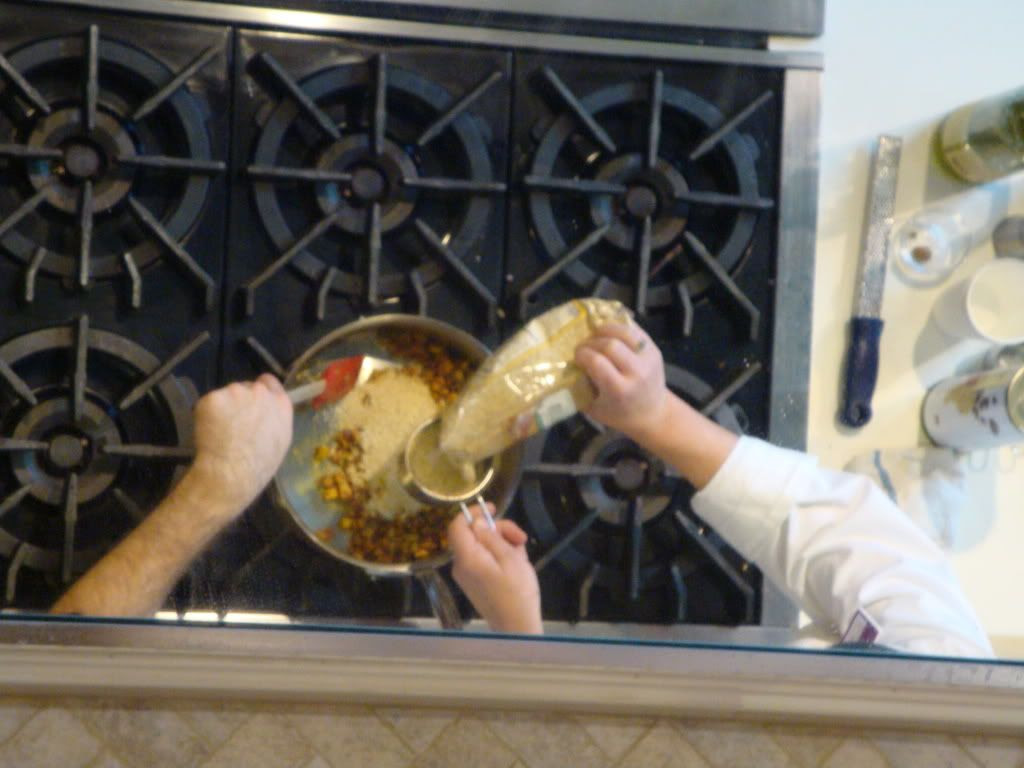 Add vegetable stock, golden raisins, salt, and pepper to taste. Bring to a boil and reduce heat to simmer. Cover and cook for 15-17 minutes, or until all of the stock has been absorbed. Remove from the heat and allow to steam an additional 5 minutes. Fold in the fresh chopped sage, fill the roasted squash with the stuffing [or mix squash into the stuffing, if using cut-up pieces], and serve. 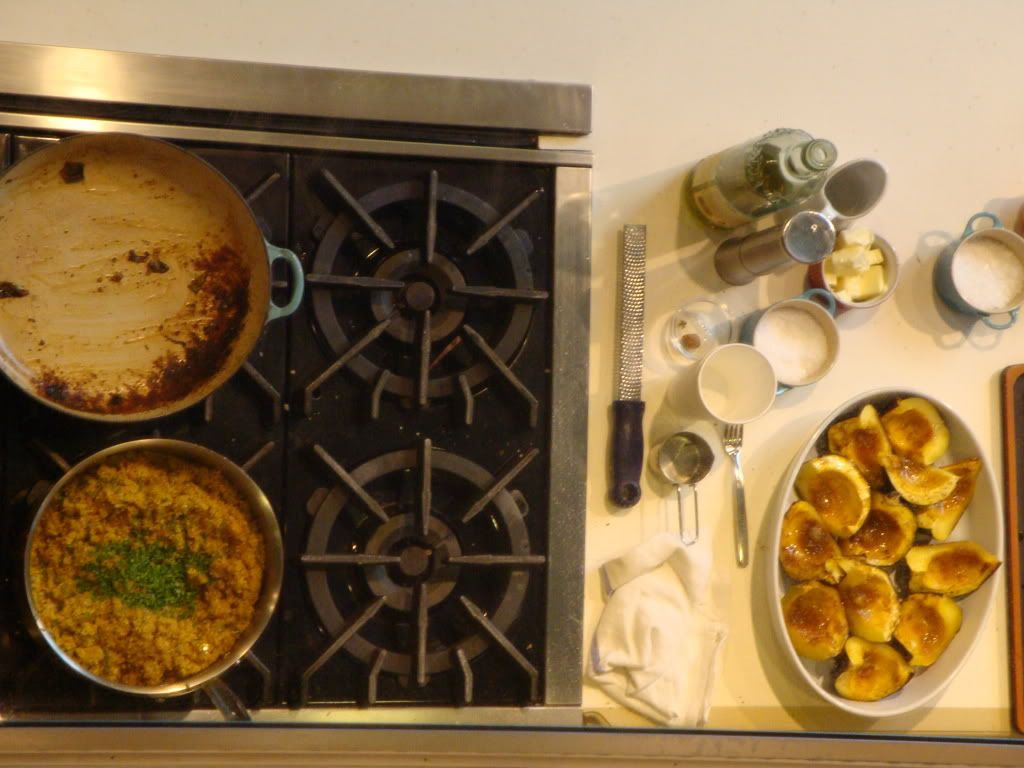 Here is a picture of the stuffed squash they served us during our cooking class: 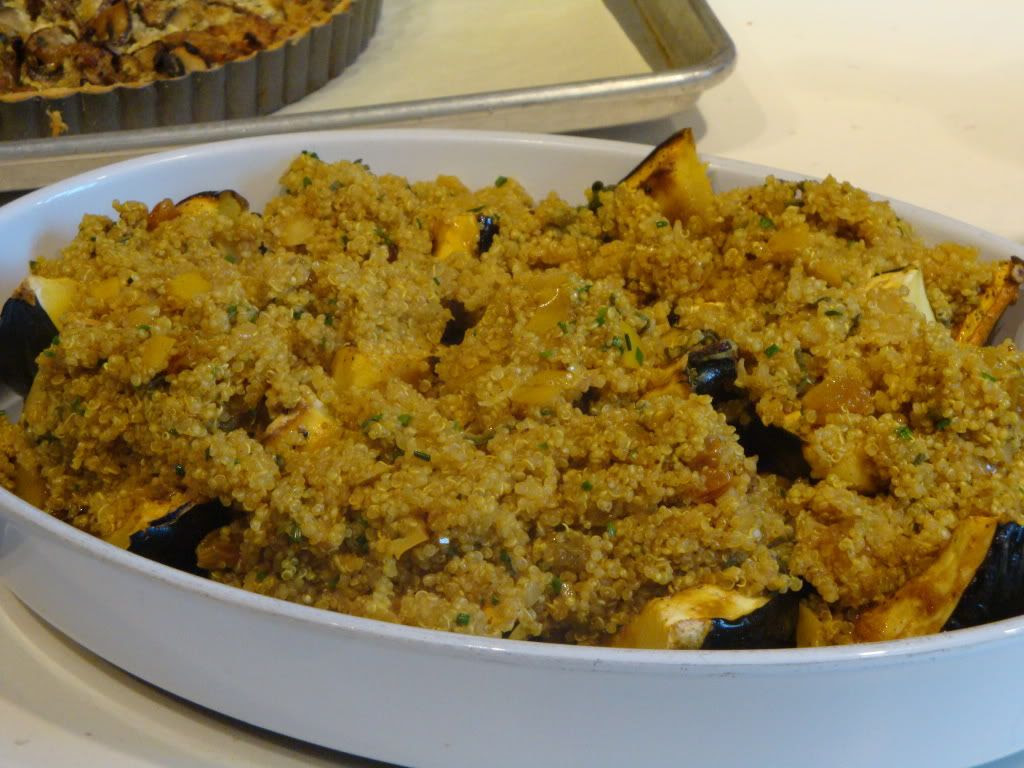 And here's a picture of the version I did for my family Thanksgiving party, where the squash was in the stuffing: 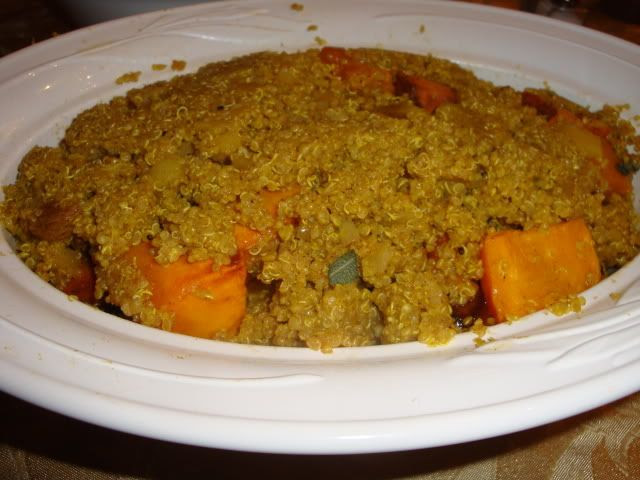 This recipe is perfect for a Field Roast vegetarian sausage. Get a pack of the apple sage flavor, slice them all up and saute them, then mix them into the dressing just before serving/putting it into the squashes. Wonderful!